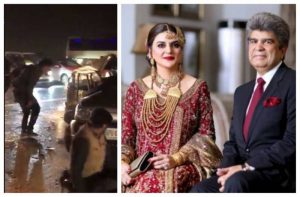 ISLAMABAD – The CCTV recording of the Srinagar Highway accident in which four people were crushed to death showed that a hatchback car was hit by a speeding Land Cruiser at 10:47 pm while it was taking a U-Turn.,,,

Police in Pakistan’s federal capital confirmed that the protocol vehicles of Federal Ombudsperson for Protection against Harassment of Women at the Workplaces Kashmala Tariq ran the sector G-11 traffic signal and rammed into two vehicles. It is not clear in the footage whether the SUV broke the signal or not.

The police added that one of the vehicles had a government number plate. Tariq’s husband got a face injury while the boy remained unhurt.

The deceased were identified as Anas, Faisal, Haider, and Farooq were killed in the accident, they had come from Mansehra in search of jobs, the officer added.

Islamabad Police also confirmed the arrest of the driver. Vehicles have been taken into custody and action will be taken in accordance with the law, the statement further added. A case has been registered under 322 (punishment for murder without intention), 279 (rash driving or riding on a public way), 427 (mischief causing damage to the amount of fifty rupees), and 337G (punishment for hurt by rash or negligent driving) of the PPC in Model Police Station Ramna.