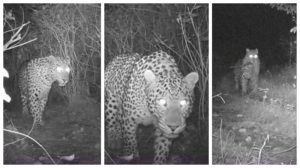 ISLAMABAD – Islamabad Wildlife Management Board (IWMB) has warned hikers not to visit Margalla Hills after dusk as five leopards roaming around the hills have been spotted in hidden cameras.,,,,,

According to the officials, a female leopard named ‘Shehzadi’ was captured around trails 4 and 6 on Sunday night. Five different leopards have been spotted in Margalla Hills National Park since 2019.

— Malik Ali Raza (@AnchorMalik1) February 2, 2021
The officials added that the Margalla Hills are a lasting habitat for the leopards. These four-legged carnivores have adapted to the surroundings and do not come out in day time.

The officials added that the leopards only attack in self-defence. The common leopard, Panthera pardus, is a critically endangered specie, and a top predator of the hills.