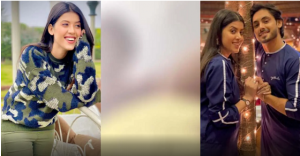 TikToker Aiman Zaman Falls Victim To A ‘Leaked Video’ Scandal. Pakistani TikTok star Aiman Zaman, who received massive popularity through her TikTok videos, has landed in a controversy over a leaked explicit video.

An alleged shocking video of her is making rounds on social media.

The tiktoker and her fiancé on Wednesday took to social media to clear the rumours about the controversy. They categorically denied it was them in the viral video.
They said that the girl in the video is completely different .

Sharing her feelings with the fans, the 28-year-old actor said that she cried for two hours over what she called ‘a shameful act’ by social media users who were sharing and commenting on the video. She also lambasted people for sharing unverified videos.
Lakhani also warned that the perpetrators of the such heinous act could also face legal action for defaming a girl.