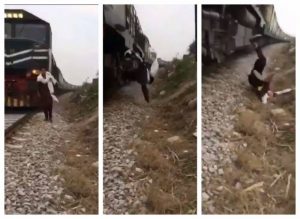 RAWALPINDI – A 17-year-old boy succumbed to death on Friday after being hit by a train as he attempted to shoot a TikTok video on a railway track.

The deceased is identified as Hamza, a resident of Noorani Mohalla. He arrived at the railway track near Shah Khalid Colony to shoot a TikTok video and mounted his smartphone with a tripod while waiting for the train.

As the train arrived, Hamza started walking alongside the railway track. The youth ignored the close distance and walked alongside the track. Meanwhile, the train’s engine hit him, causing a severe and fatal head injury.

Police and rescue officials rushed to the scene and shifted him to Benazir Bhutto Shaheed Hospital where doctors pronounced him dead on arrival.

Earlier in November last year, a security guard had accidentally shot himself dead while recording a TikTok video in Karachi.