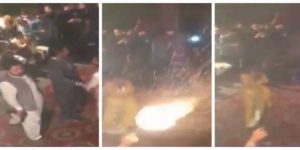 LAHORE – A video of aerial firing during a dance party in the wedding near Mughalpura area of the provincial capital went viral on social media.

The police come into action after the video of the event went viral. Man waving weapon and doing aerial firing can be seen in the video.

According to the sources, the man in the dance party teased the dancers. Meanwhile, two youths opened fire in the air, in a bid to terrify attendants and local residents. Bullets also damaged the high voltage transmission lines.

Police registered a case but no arrest has been made so far. The incident took place a week ago during the wedding of a Lahore man named Zeeshan, police said.

The accused are identified as Rana Asad and Waqas who opened fire in the air during the dance party.