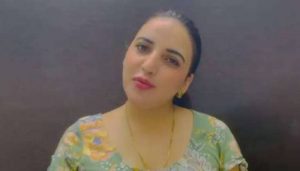 ISLAMABAD – TikTok sensation Hareem Shah has accused her former friend and her male partner of physical assaulting her and breaking into her flat in the federal capital.

The 36-year-old, who has remained a controversial figure following her scandals, also lodged a case against her former friend Ayesha Naz and her male partner, Bahadur Sher Afridi.

FIR lodged from her real name, Fiza Hussain, at the Golra police station stated ‘I resident of E-11 (III) Omni Arcade came to Islamabad from Karachi for shooting on March 16 and two people Ayesha Naz and Bahadur Sher Afridi forcefully entered to my flat on March 18 (Thursday). The attackers started assaulting me as soon as they entered my residence, it further added.
Speaking with a private news channel, Shah further revealed that the male intruder, Bahadur Sher Afridi, intruded on her flat in a drunken state and put his hand on her mouth as she started making a commotion in a bid to alarm the neighbours. Both fled away from her spot after a brief ruckus and police have failed to arrest any accused yet, she added.

The Raaz actor also announced to get help from the Cyber Crime Wing of Federal Investigation Agency (FIA) as her friend Ayesha threatened her of leaking her private videos and documents. Ayesha is not my relative but a friend, she clarified.