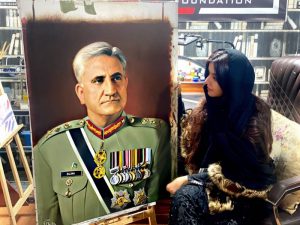 In a tweet, she shared her masterpiece and wondered how she might be able to give it to him. She added that her father was an army officer and thus she has great respect for the armed forces. She said the sacrifices of the armed forces and their bravery is the reason we have liberty, autonomy, and security.

The former singer had earlier paid tribute to Fatima Jinnah, Mother of the Nation, by painting her portrait.