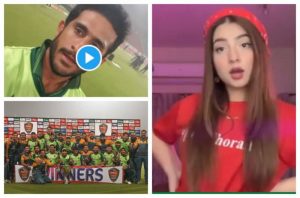 Since last week, the #pawrihorihai has been taking Pakistan by storm with celebrities and people of all walks of life hopping on to the trend.

Earlier tonight, Hasan Ali hit two sixes in the penultimate over to help Pakistan clinch the Twenty20 series against South Africa with a four-wicket win in the third and final match at Lahore’s Gaddafi Stadium.

Hasan finished with a seven-ball 20 not out as Pakistan overhauled a 165-run target in 18.4 overs to win the series 2-1, South Africa’s first T20I series defeat in Asia.

South Africa had previously won five and drawn one T20I series in the continent.

Pakistan won the first match by three runs while South Africa took the second by six wickets, both also played in Lahore.