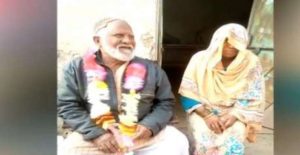 Attar Mio who is 80-year old ties knot with 75-year Naziran Bibi in Manurian village in Kanganpur in district Kasur.

LAHORE:  An 80-year old man married 75-year old woman he had fallen in love with in their youths.Attar Mio, the resident of Manurian village in Kanganpur, tied the knot with 75-year-old Naziran Bibi. Their marriage proved their true love and this fact as well that age for love did not matter.

This time, families of both sides, did not object on their marriage. The members of both families took part in walima function and celebrated their wedding which happened 50 years after the first attempt.

Attar remembered the time when he proposed and promised Naziran to marry her but he failed because of differences between both families.

The love birds tied the knot in ceremony in Hashimpur Mohallah in Kanganpur in Chunian Tehseel of District Kasur.