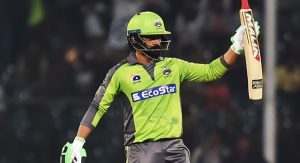 A disciplined bowling effort from the Lahore Qalandars bowlers restricted the Peshawar Zalmi side to a below-par score of 140 runs which was chased down by a collective effort from the batting unit resulting in a four-wicket victory for the Qalandars at the National Stadium in Karachi on Sunday.

Chasing a target of 141 runs, openers Fakhar Zaman and Sohail Akhtar were off to a cautious start. Spinner Mujeebur Rahman struck the first blow, removing skipper Akhtar, caught by fielder Shoaib Malik, after the batsman had scored 14 runs off 14 deliveries.

Fakhar Zaman was the next to depart after making a run-a-ball 15-run knock, dismissed by pacer Wahab Riaz and caught by fielder Shoaib Malik who completed his second catch of the match.

All-rounder Agha Salman had a decent start scoring 21 runs off 16 deliveries before being bowled by all-rounder Amad Butt.

As the Lahore Qalandars side closed in on the target, pacer Saqib Mahmood delivered another twist in the tale, picking up two quick wickets. The fast-bowler first removed all-rounder Samit Patel 9eight off 11) before dismissing all-rounder David Wiese for a golden duck after reviewing an LBW decision that was originally given not-out.

As wickets fell from the other end, veteran all-rounder Mohammad Hafeez extended his solid run-of-form. The veteran batsman was joined by all-rounder Rashid Khan (27 off 15) and the duo guided their side through the finishing line with four wickets to spare. Hafeez remained unbeaten at the end of the match after scoring 33 runs off 26 balls.

Fast-bowlers Wahab Riaz and Saqib Mahmood were the pick of the bowlers for the Peshawar Zalmi side picking up two wickets each.

Earlier, a disciplined bowling effort from Lahore Qalandars blew away the top-order of the Peshawar Zalmi side before a vital fifty from all-rounder Ravi Bopara helped his team reach 140 runs at the end of their allotted overs.

Peshawar Zalmi were asked to bat first after Lahore Qalandars’ captain Sohail Akhtar won the toss. The decision by Akhtar paid instant dividends as pacer Shaheen Shah removed opener Imamul Haq for a golden duck. The pacer swung it away from the batsman who managed to edge the ball to wicketkeeper Ben Dunk for a straightforward dismissal on the first ball of the match.

Zalmi’s were further dented by a double-strike from pacer Salman Mirza, who replaced the injured pacer Dilbar Hussain in the side. The pacer first removed veteran opener Karman Akmal (five off 10) as the batsman flicked a delivery straight into the hands of fielder Agha Salman.

Batsman Haider Ali was Salman’s next victim, edging an out-swinging delivery to wicketkeeper Ben Dunk for a golden duck.

Veteran all-rounder Shoaib Malik appeared to be in sublime form, soaking up the pressure as wickets fell on the other end in the initial stages of the innings.

All-rounder David Wiese however got the better of Malik, forcing an edge that was comfortably taken by wicketkeeper Dunk, after the batsman had managed to score 26 runs off 24 deliveries to reduce Lahore Qalandars to a scoreline of 46 runs for the loss of four wickets.

All-rounder Ravi Bopara and Sherfane Rutherford then initiated the task of rebuilding the innings with the added challenge of building a foundation for the side for a strong finish. The duo combined for a 64-run partnership off 57 deliveries that stabilised the Qalandars’ innings.

Shaheen Shah however returned into the attack to remove Rutherford, caught by fielder Agha Salman, after the batsman had scored 26 runs off 27 deliveries.

Bopara brought up his fifty but was soon removed by Shaheen Shah, caught by Rashid Khan, after the batsman had managed 50 runs off 44 deliveries.

A late unbeaten cameo from all-rounder Amad Butt (23 runs off 11 deliveries) propelled the Peshawar Zalmi side to 140 runs at the end of their allotted overs at the expense of six wickets.

Shaheen Shah was the pick of the bowlers for Lahore Qalandars, picking up three wickets off four overs at the expense of just 14 runs. Salman Mirza picked up two wickets while David Wiese picked up one wicket during their respective overs. 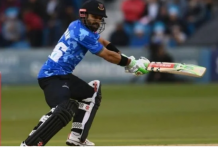 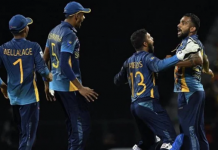 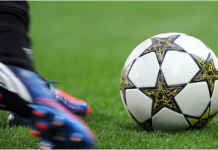