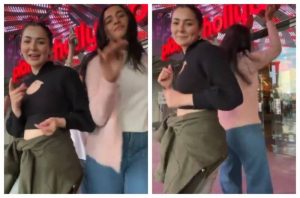 Pakistani singer and actress Hania Aamir has left her fans awestruck with her dance move outside a restaurant in the US.

The Mujhay Jeenay Do actress shared a video on Instagram showing her dancing while waiting for a meal at the restaurant in Las Vegas.

A local, who can be seen in the video, also briefly joined Hania Aamir and her friend for casual dance.

The viral video of Hania and Dananeer has taken the Internet by storm where Dananeer is sitting on the Dilruba star’s lap and is being forcefully fed by her while the ‘Pawri’ girl pouts and eats.

The adorable interaction has left some fans gushing but others have labelled it cringe-worthy and criticized the girls.