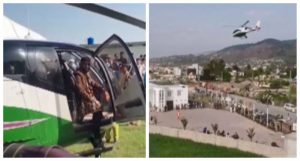 MUZAFFARABAD – A man hired a helicopter to fly to his bride’s home on Barat in Kotli, Azad Jammu and Kashmir.

A video circulating on social media shows the groom landing near the wedding venue in a village while hundreds of people are present to welcome him.

The relatives of the groom, however, reached the wedding hall on luxury cars as they can also be seen in the video.

According to details, the man had hired the chopper from Islamabad, making his wedding one of expensive events of AJK.

Earlier this month, currency notes were showered from a helicopter on the guests of a wedding in Mandi Bahauddin.

In the video of the bizarre scenes, shared by Channel24, rose petals and money can be seen raining down from a chopper hovering over the venue.


In most parts of Punjab, it is customary to shower the guests arriving at a wedding with rose petals, but the groom’s brothers took it to the next level by hiring the chopper to shower the groom’s arrival with currency notes and rose petals as he travelled from Harraya village for a marriage hall situated at Phalia Road.