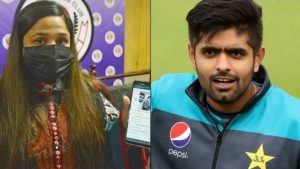 LAHORE – The petitioner in the Babar Azam harassment case has alleged that the family of Pakistan cricket team captain is offering her Rs2 million to settle the ongoing harassment case.

Hamiza Mukhtar this time comes with the latest claim that the family of the Pakistani skipper has approached her with a third party who asked to take back the lawsuit against the said amount.

Amid a regular inquiry into the matter, the 26-year-old cricketer has moved the Lahore High Court against the decision to book him on charges of blackmailing and harassment. The plea filed stated that the court also did not mention the reasons to register a case against Babar.

In his plea, the star batsman prayed to the higher court to declare the trial court’s order void and suspend the decision to register the case against the applicant till the final decision.

Babar in his petition made respondents Hamiza Mukhtar, SHO [Station House Officer] FIA’s Cyber Crime Circle and the judge of district court who had directed FIA to register FIR against him.