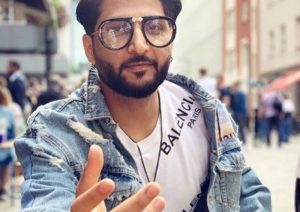 LAHORE – Bilal Saeed is in the news again, and once again, it’s not something he would be proud of…..

A woman, the mother of his sister-in-law, whom he had assaulted a few days ago, has accused the Baari singer and his brother of fraud and “theft of about Rs 8.5 crore (85 million).”

In an interview with a local TV channel, the woman said Bilal was her son’s friend and had forced her into marrying her daughter to his brother, Raza. She said he was involved in a theft of around Rs85 million for which he had been denied bail, but was still roaming free. She said her son was the driving force behind Bilal’s fame.

Bilal was in fact denied bail in a theft case of £400, AED 2,000, 16 watches and gold ornaments weighing over 1,760 grammes. The case was filed by one Rukhsana Bibi, who in the case claimed to be the mother of Bilal’s alleged girlfriend Nosheen.

The woman in the interview had not disclosed her name.

She alleged that Bilal had been threatening her daughter and her to give him money and upon their refusal, had become violent. She added that Raza and her daughter had taken the police with him at the time of the incident of the viral video where Bilal can be seen hitting his brother and sister-in-law.
However, police had told media that it was the singer who had called the cops to the scene before the violence had begun.

Bilal had posted a reply to all the backlash he had received on the violent video, claiming that it was he who had been the victim in the matter, showing vandalised furniture and TVs in his home apart from a shattered, framed picture of the singer.